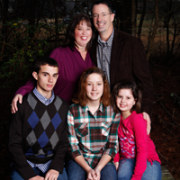 Within a few months of moving to Atlanta, Brother Marty began ministering to the Shoal Creek Primitive Baptist Church in Canton, GA where he was soon called as pastor.  He began serving there as pastor in March of 1991 and continued to serve there until March of 1997.  During this time, Brother Marty and Sister Twanna celebrated the birth of their first child, Andrew in 1994.  After serving Shoal Creek, he and Sister Twanna moved to Southeast Georgia, where Brother Marty was called to pastor the Zion Primitive Baptist Church in Brunswick, GA.  Brother Marty began serving there in September of 1997 and that service continued until September of 2007.  During this tenure, two more children were born into the Hoskins family, Hannah – 1997 and Madysen (Maddie) – 2003.